This city is so extra. Whether it be the sunnier side or the seedier side, there’s never a dull moment in Amsterdam. So much to see and do.

My best friend Amanda Sperling came to join us Gingers again in Amsterdam (she had joined us in Greece too), and Pauline Bond, Scott’s cousin, also continued here with us from Munich. This was the most socialization we’ve done in months!

We arrived late on Thursday night, and we slept at a nice hotel close to the airport so that I could meet Amanda there Friday morning. I was so excited to see her that I barely slept; it’s amazing how much you miss your friends when you’re so far away from them. I found her easily at the airport and, after lots of hugs, we took a bus to our Airbnb. (Scott and Pauline didn’t come to the airport, so they met us at the Airbnb a bit later.) We caught up for a bit and agreed to taste all the Dutch classics during her visit. Then Scott and Pauline arrived, and we three gals headed into the city while Scott worked.

That first day we walked around the city, ate some delicious chunky fries – a specialty of Amsterdam – took a walking tour, had a delicious Indonesian dinner, and generally just talked our faces off.

Connie & Amanda — The Sunny Side of Amsterdam

The next day Amanda and I went off on our own (Scott and Pauline did their own thing most of the weekend, as did we two — Scott’s adventures with his cousin are in the next section). The first order of business was a lovely outdoor market where Amanda bought some beautiful pottery bowls to add to her collection from Greece. We then wandered around the city a bit more until it was time for our canal boat ride. There we quickly made friends with an awesome couple from Scotland, Jono and Emma (hi you two!); we laughed and drank to our hearts’ content, seeing as the ride had unlimited booze (YES!).

Afterwards, the four of us went for some Heinekens and then ventured into the Red-Light District, where we toured the Museum of Prostitution. (When in Amsterdam, amirite!?) It was very informative, to say the least. After saying goodbye to our new friends, we met up with Scott and Pauline for some fancy cocktails before dinner. 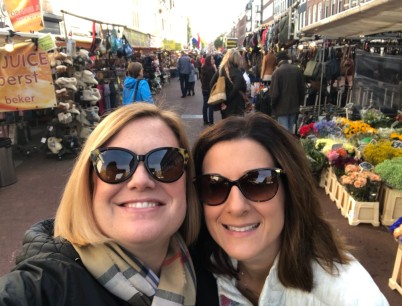 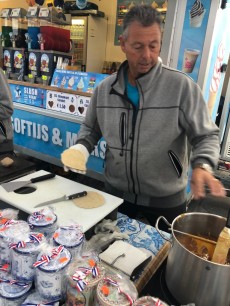 The next day, we went on an incredible (and exhausting) bike tour of the Dutch countryside. Funnily enough, it was with the same bike tour company, Mike’s Bikes, that I had used in Amsterdam 15 years ago! We started in the city and biked to the countryside, where we stopped at a few windmills and fields with cows and horses. Eventually we arrived at a farm where we got a tutorial on art of cheese-making and wooden shoe-making. We got to eat some cheese samples, had a nice lunch, and petted some cows, and Amanda bought some souvenirs. This bike tour was our favorite thing we did while in Amsterdam — I highly recommend it!

We got back to the city around 4 PM and sped over to make our reservation for the Heineken Experience. This was fun, and we got a few beers in the process. We were tired after our long bike ride, though, so we had a nice, quiet dinner and then went back to the Airbnb. 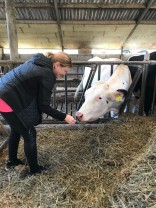 The next day, we set off again, starting with yummy pancakes for breakfast; “Mook Pancakes” is sooooo good, and their service was top notch. On our canal ride two days prior, we had seen a sign for the Purse & Handbag Museum, which we clearly had to visit, so that was our first destination this day. We spent about two hours there marveling at all kinds of beautiful bags and purses throughout the past several centuries. It was so cool… and we wanted every. single. one.

Afterward, we took a ferry to the Amsterdam Tower (after picking up some powdered Dutch donuts first). From the tower, we had a wonderful view of the city, along with lots of strong gusts of wind. We also got a few pictures of us on the horse statue that’s on the viewing platform; why it was there is a mystery. We then found the “I Am Amsterdam” sign, where we took more pics — we were in full-on tourist mode, in all our glory! We ended the day with some craft beer at a local brewery that’s connected to a windmill (how cool is that?!) and a burrito.

The next morning, we had to say our goodbyes at the airport, which was hard: I want Amanda to travel with us all the time! She flew to Atlanta, and the Gingers flew onward to Budapest.

It was such a good time being with Amanda, and I miss her so very much! Maybe I can convince her to come join us in Central or South America, assuming she has more air miles… Love you, Amanda! Thank you for joining us again!

Scott & Pauline — The Shady Side of Amsterdam

Once Amanda arrived in Amsterdam, she and Connie and Pauline hung out together for the first day while I caught up on some work. The next day, Pauline got an early start while I did just a bit more work in the morning, and then I met up with her at a little open-air market. Then we grabbed some lunch at a Turkish place called Café Ufuk. Yep, we sure didn’t make any jokes about the name.

Heading further into town, on the edge of the Red Light District, we visited the Museum of Sex, or properly the “Sexmuseum Amsterdam Venustempel,” which contains an interesting examination of human sexuality and the history of pornography. Really, though, at the end of the day, it’s kind of just a place with a lot of nude pictures… I mean, not that that’s a bad thing. But it was less a “museum” than a photo exhibit. After the Sexmuseum, we wandered into the Red Light District proper to see what this famous place is all about.

Turns out, it’s pretty much all about sex. Well, there are booze and drugs and tattoos and stuff there too, but the overriding thing is sex. If you’ve never been, it’s worth sauntering through this part of the city. It’s both a piece of history and a living piece of culture in one of the liveliest cities I’ve seen. You won’t see anything you haven’t seen before, and you might have some fun! Just don’t have your smart phone in your hand as you walk past the red-lighted windows lest, as Pauline discovered, the women in the windows think you’re trying to take pictures of them.

Actually, that’s a good safety tip for travelers: Pictures of sex workers in the red light district are strictly forbidden. And the security for these establishments will enforce that rule vigorously, if not happily.

A bit later, we met up with Connie and Amanda for cocktails and some dinner. We split again after dinner, though, since Pauline and I had tickets to see a circus / acrobatic performance. It turned out to be pretty excellent: There was far less pageantry than any Cirque du Soleil production, being pretty minimalist in terms of sets and costumes, but the performers were very good. After the show, we went out drinking and stayed out pretty late. Honestly, it’s a bit of a blur. 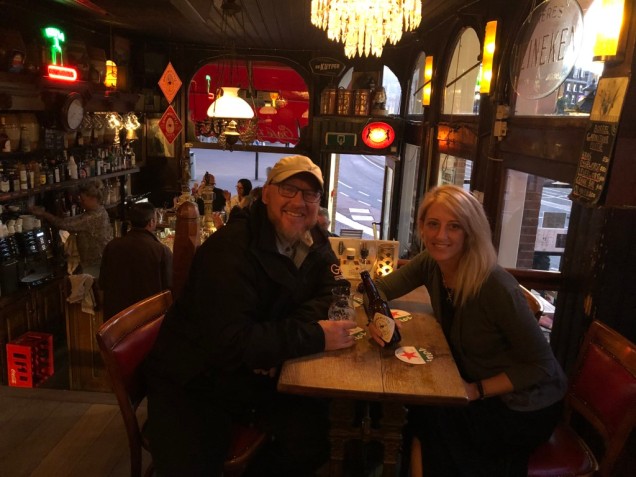 The next day, a little hung over but none the worse for wear, Pauline and I went on a boat tour through the canals. Some hair of the dog soon set things right. We went with a really fun little company called Those Dam Boat Guys. The group was small, about 10 people total, and we had a pretty fun group. Better yet, our captain was a young woman originally from the States. Her name was Morgan.

After the boat tour, we split up for an hour or two while Pauline went to do some souvenir and gift shopping. While she was away, I had a couple beers and some amazing little Dutch pancakes called poffertjes, smothered in cherries and whipped cream. Sort of like mini-Belgian waffles, but more pancake-y than waffle-y, and smothered in butter too. I don’t think I’ve ever enjoyed food so much.

Pauline and I then met up again at the Heineken Brewery for a tour, where Connie and Amanda also caught up with us briefly. We finished the tour, had our obligatory beers they offered at the end (which we all hated, of course), and then we split up again. Pauline and I found a seafood place where I drank whiskey while she ate (since I was still full from my pancakes earlier). Then we spent some more time seeking out the seedier side of Amsterdam and, once again, stayed out well past any sane person’s notion of bedtime.

The next day, Pauline had to rush off to catch her flight back to her real life in Ottawa, with kids and a new job, while the rest of us had one day left in Amsterdam. I spent most of the last day recuperating while Connie and Amanda bustled off and went about being best gal pals.

And that’s about it! Our time in Amsterdam was short, but very full. We ate, drank, and laughed lots, and we also met lots of people, some of them nude. What more can you ask for?! Hooray!

One thought on “Amsterdam”